There are the physical bridges that we cross, then there are the countless other actions, moments, events, experiences that move us from one subtle plane to another. We are constantly crossing into these new places, new spaces, not just in body, but also in our hearts and in our minds.

PHOTO: Brooklyn Bridge, NYC. These days are filled with bridge-crossing for me. Just finished 6-days of practice with my teacher Sharath Jois in NYC. My sister is soon to be married in Brooklyn and my parents are flying in today. And then I’ll be off myself to teach in Egypt. All bridges. On the other side: untold possibility.

Inner Dance. Feeling each other’s field of energy. Sending each other “good vibrations.” Setting up a session for partner work.

Two Sundays ago, August 31, I watched with great surprise how the room filled up in Spirit Yoga in Osaka, Japan.

A year ago, when I offered Inner Dance for the first time in here, during a two month teaching stint, numbers were modest. Sessions drew an average of three to four participants. And the sessions themselves had the quiet reservedness of the Japanese culture; it was beautiful but very subtle, skimming the surface.

Due to the small numbers last year, we at Spirit decided that perhaps two sessions would do this time around. One for July and another at the end of my trip in August. Little did we know that the interest for inner dance had grown, that a thirst for it had somehow quietly developed.

In July, there were 11 participants. It was a successful offering, some participants moved deeply, recognizing some strong internal patterns. After the sessions, through word of mouth and through facebook, people continued to share their surprise and excitement at the process. By the final session, the room filled with 20, most of whom had studied with me, in the Mysore morning program or the other ashtanga classes in Spirit.

I have never thought of the numbers for ID. I have always been happy with whoever is drawn to the process, knowing full well that whoever comes is there for a reason, that they are answering a deep internal call for realization or healing. Inner dance was introduced to me when I was myself in such great need for it, when my own life needed agreat deal of clearing. And have looked upon my sharing of it more as an act of seva, of selfless service. So, I am so thrilled to see it grow organically–to do nothing but just love and be with it, and then to see it blossom, what a blessing!

When I realized that the group was 20-strong, I knew that I could not justly facilitate the entire group in one dance, more than half new to the process. So we launched into two smaller partner-led inner dances. I love when things work out so. Facilitating brings a different element into the experience. We become more aware of our own energy, we actively see the mystery of energy unfold before our eyes and how that energy dances with the energy of another human being. It was a beautiful dance, there was so much giving, so much love and respect and wonder.

At the end of the session, I felt a great feeling of expansion–that Inner Dance would continue to grow in Japan with or without me, and that this energy would continue to expand elsewhere, everywhere. Already there are more and more trained facilitators all over the world. The growing interest is an indication of how we are opening as a collective energy. Each moment we think that we are more that the limited being that we so often perceive, we are creating a ripple of love and change. And the Earth, the planet, all of us as co-inhabitants in this world, we need this. If we look at the news, it is all about closing and separation. Each person who breaks away from this pattern of thought and behavior becomes a light in the dark. And in this field of energy, like our ancestors the stars, we must do what we are destined to do: Shine. 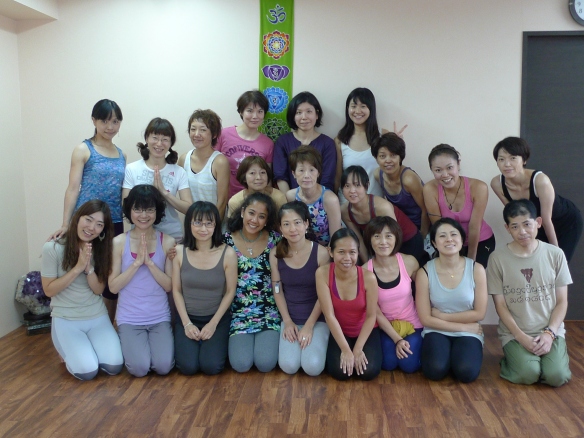 Time is a pretty interesting thing, marking our days, dividing it up into conceivable units, defining starts and finishings.

So the two months here in Japan have come to a close. My last day of teaching was Monday, farewell dinner was last night, departure for New York is early this evening. Endings, right? Nice and tidy!

The connections will continue to expand and grow through the tenacity of memory and the strength of practice.

And we, like our own practice, will continue to be wily changing things…

And the love… well, the love was always there, and the love will continue to always be there, dynamic and yet strangely unchanging.

We may say goodbye, but each farewell comes with infinite “hellos”. From here, the possibilities are endless. There is no end.

***
Having said all that, I am grateful for this particular unit of time. As usual, I leave feeling like I’ve learned more than I could have possibly taught. Thank you to the students here, your dedication to practice, your openheartedness and willingness to go to the depths is an inspiration. Thank you darling Veronique for entrusting me with such treasures, and for supporting me so beautifully throughout. Thank you to Spirit Yoga for hosting me this second time. Thank you to all who came and (Inner) danced with me, so much light and love is here. To the dear friends who I met last year and this one, thank you, it has been a pleasure to get to know you and to discover Japan though your eyes and hearts. And to Japan, once again, much gratitude–oh and thanks for the fish! With great love, till next time! — Kaz